Writer’s Block. It sounds almost reassuring, doesn’t it? You may not be actually producing anything, you may be knotted up and despairing, or guilty and restless and convinced of your own worthlessness as both a creative and a human being, but at least a) there’s a name for it and b) that name includes the word ‘writer’.

It could be caused by all sorts of reasons – writing is, if not exactly hard labour, then definitely time-consuming and difficult, and it could be that the writer is too worried about money, or is wrestling with a bout of TB, or has to look after six children under five, or is dealing with PTSD from a recent event, or any one of the other conditions under which other, better writers have produced some of their finest work. (These are the sorts of things you remind yourself of when engaged in a productive bout of self-laceration.)

All writing advice tells you to WRITE. Every day, without fail, just keep writing. But what if you…just can’t think of something to write about? Traditional ways to ‘find inspiration’ include an affair with an exotic dancer during the rise of the Nazis*, hearing a second-hand account of a couple kissing in a field** or marriage to a sociopath*** but these are time-consuming and expensive. Plus, it feeds into the idea that inspiration is something external, that strikes you like a thunderbolt, and that you have to hang around waiting for. Instead, think of inspiration as something that YOU generate, a skill you can cultivate and improve. This exercise is simple and free, and is guaranteed to give you something to write about.

Sit down with a blank piece of paper.

Put the numbers one to five in a list

Do something else for a bit (if you are at work, for example, now is a good opportunity to do some of the stuff you are actually paid to do. Just some. Don’t go nuts).

Repeat until you have 100 ideas.

I know that sounds like a stupidly naïve suggestion. But there are some rules to make it easier:

This will probably take you a couple of days, working around other stuff. But by the end, you will have A HUNDRED IDEAS. Pat yourself on the back and reward yourself in whatever way suits you best.

Now you can read back through your list. Some of the ideas will immediately seem ideally suited to short stories, some to poems, some to sweeping sagas and some to being put in a sack and dropped off a bridge. And there will be AT LEAST three (I guarantee it) that have legs, and maybe even make you feel a bit excited about writing them.

Suddenly you have gone from not knowing what to write about, to being in the luxurious position of deciding which idea you want to write first. Ta-dah! Reward yourself again, because you really have done awfully well.

This system does not guarantee to find the idea that will inspire your magnum opus, make you famous and mean you spend the rest of your life tripping over royalty cheques when you wake up in the late afternoon. But I promise you that you will have something you can then go ahead and write.

This works on something I call ‘The Bath Tub Curve of Idea Generation’ because I am, in my heart, Alan Partridge. 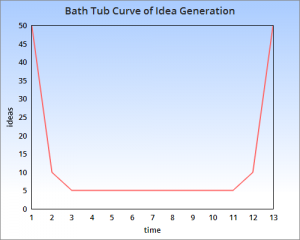 A Bath Tub Curve looks like a cross section of a bathtub (see illustration). When you try to think of something to write about, your mind immediately goes to existing ideas that you have previously thought of, which are waiting around in your idea bank. This is the left hand edge of the graph, with a high score on the y axis. The problem with these ideas is you have already thought of them and decided (consciously or subconsciously) not to pursue them.

When you keep thinking, the line immediately plummets to ‘no ideas’ and stays there for a while, bumping along the bottom. This is very discouraging, as it feels like you will never, ever be able to think of anything again, and are a fraud, an idiot and a waste of a laptop. The temptation at this point is to give up and return to one of the old ideas, the ones you have already thought of and discounted, and try to find a way to make them work in spite of themselves. This bit is ‘writer’s block’.

Writing a hundred ideas forces you to push on through this stage and get to the glorious third part where suddenly your brain starts to think of actual, genuine NEW STUFF. They will not all be brilliant ideas (the graph has no metric for ‘quality’ only ‘volume’ after all) but they are at least new. Then you can pick out the good ones at your leisure.

This allows you to have bad ideas, and keep going anyway. It can be tempting to have an idea, fixate on it and spend precious time thinking of ways to develop it and make it work. When it doesn’t immediately go anywhere, you discard it and feel slightly worse about yourself. If you write the idea down and then move on, you can come back to it later and see if it has any merit. You may find that your brain has been quietly tinkering away in the background, and when you come back to an idea (weeks or even months later) you can think of new ways in which it might develop.

And finally, the system is tremendously reassuring. You have demonstrated to yourself, undeniably, that you are capable of coming up with ideas. Starting points for stories are not a finite resource, that must be carefully guarded and never, ever wasted. They are a glorious, never-ending abundance, surrounding you, and whenever you need one, you can think of a hundred and then just pick your favourite.

*Miss Eleanor Lavish, A Room with a View

*Ralph Marvell in the Custom of the Country

A Repository of Orphaned Art

About the Library of Rejected Beauty

and how you can submit your beautiful, but unloved, works